For those in the Oakland area, I wanted to invite you to a special, educational seminar hosted by Alta Bates Summit Medical Center in Oakland, California this Thursday, February 17, at 6:30pm.

During this complimentary session titled, “For People with Heart Murmus”, Dr. Junaid Khan, staff surgeon, will discuss heart valve disease and the various treatment options available to patients. To help patients and their caregivers understand the patient perspective on heart valve surgery, Dr. Khan has asked me to speak at the event and then sign books. FYI, all books signed will be provided at no charge for those who RSVP in advance of the event (while supplies last). 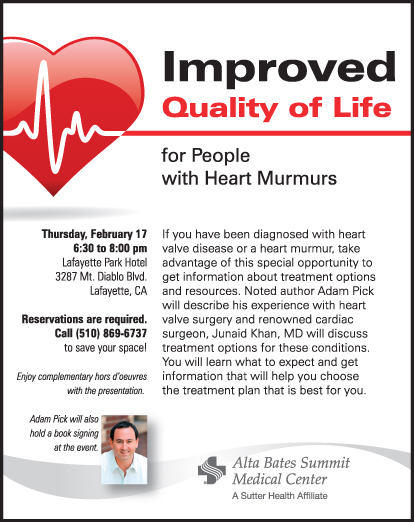 I hope to see you there!

Since writing my book and launching this website, I have been very fortunate to meet some amazing people. One such person is Dr. Marc Gillinov of the Cleveland Clinic. Not only is Dr. Gillinov an incredible surgeon but he is a patient advocate and a proactive supporter of our community.

That said, I was thrilled to interview Dr. Gillinov about the important — but sometimes overlooked — topic of cardiac depression. As I personally experienced, cardiac depression can be an unexpected and unnecessary pitfall during the recovery from heart valve surgery.

END_OF_DOCUMENT_TOKEN_TO_BE_REPLACED

Surgeon Video Blog: “What Advice Would You Give Yourself If You Were A Patient?” By Dr. Vincent Gaudiani

For those unfamiliar with the name “Dr. Vincent Gaudiani”, I’m hopeful this video provides a unique opportunity for you to gain awareness and access to this special cardiac surgeon from Northern California. During his 25+ year career, Dr. Gaudiani has performed over 10,000 heart-related surgeries. Most importantly, Dr. Gaudiani has a way with patients that compels them to email me glowing surgical reviews, praise and success stories (e.g. George Avakian).

That said, I was excited to meet with and interview Dr. Vincent Gaudiani at the 47th annual Society of Thoracic Surgeons convention earlier this week. Here is Dr. Gaudiani’s response to the question, “What advice would you give yourself if you were a patient?”

Also, for those of you who are hearing impaired, I have provided a transcript below for your review.

END_OF_DOCUMENT_TOKEN_TO_BE_REPLACED

I wanted you all to know that Heart Valve Surgeon Finder – the world’s first heart valve surgeon directory created by patients, caregivers and surgeons — has undergone some great enhancements lately. 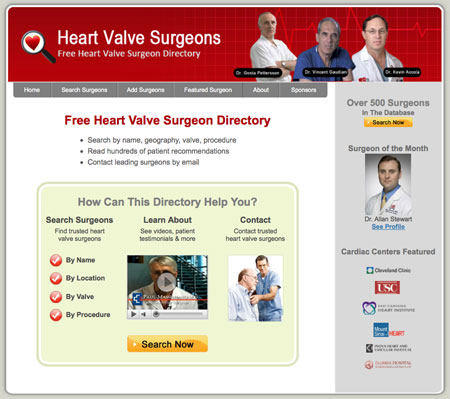 In addition to giving the site a new look-and-feel, we have begun embedding surgeon videos throughout the website. That way, you can learn more about heart valve surgeons via interviews, patient success stories, clinical research and operating room observations.

Also, if you would like to help expand this educational effort… Please, please consider adding your own surgeon experience to the database. That’s right! If you are a former patient, you can help! Simply click here to learn more. (It only takes 5 minutes.)

Thanks to Becky, I just learned that Barbara Walters is hosting a special program about heart surgery titled, “A Matter of Life & Death”. The show will air on ABC at 10pm (EST), Friday, February 4. 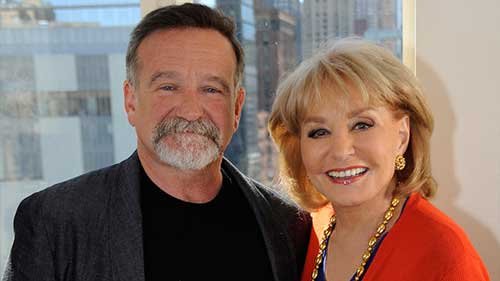 Guests scheduled to appear on the show include:

Needless to say, our DVR is already set to record this very special show!!!

“Can Minimally Invasive Aortic Valve Surgery Occur With An Aneurysm Of The Ascending Aorta?” By Dr. Richard J. Shemin

I am very excited to introduce the first of several “Surgeon Video Blogs” that were filmed at the 47th annual Society of Thoracic Surgeons meeting earlier this week.

In this video, Dr. Richard J. Shemin, chief of cardiothoracic surgery at UCLA Medical Center, responds to Barbara’s question, “Can minimally invasive aortic valve surgery occur if there is an aneurysm of the ascending aorta?”

END_OF_DOCUMENT_TOKEN_TO_BE_REPLACED

Five years after heart valve surgery, I find myself taking incredible steps on this journey of patient education, patient research and patient empowerment.

Last February, I was encouraged to exhibit at the annual meeting of The Society of Thoracic Surgeons. During a tour of the East Carolina Heart Institute, Dr. Randolph Chitwood said to me, “Adam – You’re doing some great work. You should go to STS so the other surgeons can learn about your book and websites.” 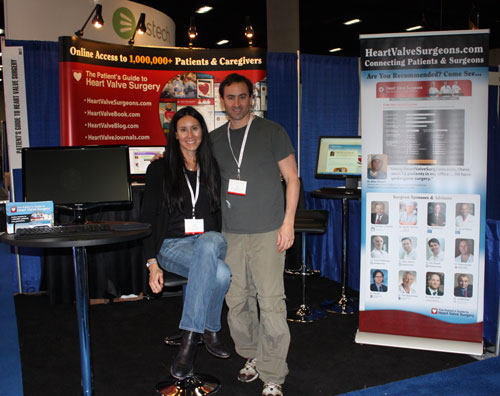 Me and Monica (My Sister) After Setting Up Our Booth

END_OF_DOCUMENT_TOKEN_TO_BE_REPLACED

I wanted you all to know that I am driving to San Diego, California for the 47th annual Society of Thoracic Surgeons convention. Over the next few days, I’ll be meeting with several leading heart valve surgeons including Dr. Gillinov, Dr. Accola, Dr. Chitwood, Dr. Adams, Dr. Pettersson, Dr. Ad, Dr. Stewart, Dr. Roselli and many others. In total, I’ve heard that over 1,500 surgeons attend STS each year.

END_OF_DOCUMENT_TOKEN_TO_BE_REPLACED

I recently received an interesting question from Rob about a post-operative cough following heart valve surgery.

Rob writes, “Adam, My wife — Gail — recently had a valve sparing aortic valve repair and had an artificial aorta. Gail has had a post-operative cough for about 5 days now.  Is this common? Are there any remedies to help it along? Thanks for all you do! Rob”

To ensure that Rob received an expert response to his question, I contacted Dr. Jeffrey Swanson, a leading heart valve surgeon from Portland, Oregon.

During his 20+ year career, Dr. Swanson has performed over 3,000 heart valve procedures at Providence St. Vincent Medical Center. (Not only is Dr. Swanson a highly-recommended surgeon – from many visitors of this website – he’s a very nice guy as well.)

END_OF_DOCUMENT_TOKEN_TO_BE_REPLACED

After Ross Procedure, John Keeps On Tickin’ And… Rockin’

It’s always fun to hear from patients as they recover from heart valve surgery and return to their life passions. Today, I received a fantastic email from John Coleman in Arkansas. John writes:

Adam –  At 43 years old I was diagnosed with severe aortic stenosis. Like you, I elected to have the

Ross Procedure, a double valve replacement, in August, 2010 here in Arkansas. I read your book prior to surgery. It was really helpful in getting my mind and body prepared for the surgery and the recovery.

END_OF_DOCUMENT_TOKEN_TO_BE_REPLACED

I just learned that Dr. Tomislav Mihaljevic, a leading heart valve surgeon from The Cleveland Clinic, will host a live Internet chat on February 7, 2011. During the event, titled “Ask The Heart Surgeon”, Dr. Mihaljevic will answer your questions about cardiac surgery — including surgical techniques, minimally invasive surgery, off-pump bypass, and robotically assisted procedures. The online session will begin at 12pm EST and registration is now open.

I think this is a very special opportunity to chat with Dr. Mihaljevic as many members of our community, including Ashish Yaduka (mitral valve repair) and Anne Shannon (minimally invasive aortic valve replacement), have had excellent surgical results with Dr. Mihaljevic.

Again, the event is scheduled for Monday, February 7 at 12pm (EST).

I hope this helps!

An Extraordinary Response To Ruth’s Question, “What About Mitral Valve Repair Of A Prolapsed Anterior Leaflet?”

I recently received an anxious email from Ruth about mitral valve repair. Ruth writes to me, “I would like to learn more about a prolapsed ANTERIOR leaflet of the mitral valve. I have been told that repair may not be possible. I am terrified… Do you have any information on the risks involved with this type of repair? Thanks, Ruth”

Considering the urgent nature of Ruth’s question, I contacted Dr. David H. Adams — a leading mitral valve repair surgeon from The Mount Sinai Hospital in New York. What happened next is quite extraordinary… First, Dr. Adams quickly responded to Ruth with a comforting email. Then, Dr. Adams created a 22-minute video to help patients better understand this type of mitral valve surgery.

END_OF_DOCUMENT_TOKEN_TO_BE_REPLACED

During 2010, this global community of patients and caregivers actively discussed many topics that impacted our own, heart valve surgery experiences. That said, I just reviewed all 179 posts from 2010 to determine the “Top 10 Heart Valve Surgery Blogs of 2010”.

To develop this list, I used several factors including web traffic reports, your comments and your emails. As you might imagine, this was more difficult than expected. Similar to last year, we even had a tie.

So… Without further ado, here are the top ten heart valve surgery blogs of 2010:

10. The importance of second opinions and patient advocacy, revealed by Anne Shannon from Colorado, propelled “Remote Second Opinion Changes Anne’s Surgical Approach” to the tenth spot on our list.

9. We were, once again, perplexed by the lack of awareness to the patient benefits derived from cardiac rehabilitation programs — given a September, 2010 report in the Journal of the American College of Cardiology. That said, “Patient Concern: Cardiac Rehab Referrals Continue To Disappoint” arrives in the ninth position on our list.

7.  Thanks to an email from Shirley, “Incision Site or Full Body Shave?” became a very active blog as we evaluated different patient experiences specific to this pre-operating room event.

6. An inspirational patient story about Ken rocketed “From Stroke… To Heart Valve Replacement… To The Gym” to the sixth spot on our list.

END_OF_DOCUMENT_TOKEN_TO_BE_REPLACED

With the exception of Barbara Walters’ heart valve surgery in May, this year was relatively quiet for public figures needing heart valve repair or heart valve replacement operations. However, our list of “well-known patients” did expand during the final week of 2010. 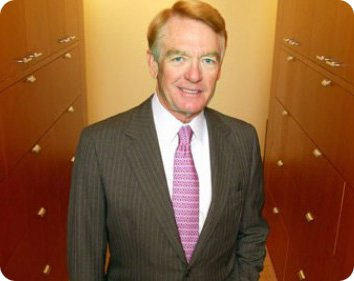 END_OF_DOCUMENT_TOKEN_TO_BE_REPLACED

“Happy Everything!” From Us To You

Ethan, Robyn and I wanted to wish you all a very safe and very happy holidays!!! 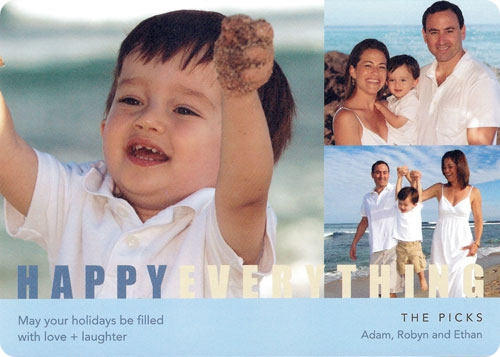 No need to preface this… Prepare for patient inspiration.

I feel honored to share with you that our website sponsors the Iron Heart Racing team. If you have a minute, you may want to learn about its extraordinary leader, David “IronHeart” Watkins, a former aortic valve replacement patient and endurance athlete.

Hard To Believe… My Heart Valve Surgery Was 5 Years Ago Today?

It’s hard to believe that five years ago, at this precise moment, I was rolled into an operating room at USC Medical Center in Los Angeles, California. There, during a 3-hour procedure, Dr. Starnes performed an aortic and pulmonary valve replacement surgery that fixed my enlarged heart.

It’s hard to believe that five years ago today, my life would slowly begin to transform.

END_OF_DOCUMENT_TOKEN_TO_BE_REPLACED

“Why Didn’t You Get Minimally Invasive Valve Surgery?” Asks Anne

I just received a very appropriate question from Anne about minimally invasive approaches to heart valve surgery. Anne writes, “Adam – Like you, I was diagnosed with severe aortic stenosis. I need an aortic valve replacement. Why didn’t you get a minimally invasive surgery? Thanks, Anne”

END_OF_DOCUMENT_TOKEN_TO_BE_REPLACED

“Can I Climb Stairs After Heart Surgery When I Return Home?” Asks Teri

Teri writes to me, “Hi Adam – I want to know if I can climb stairs after heart surgery – once I return from the hospital. Our bedroom is on the second floor. Is that too much to expect? I am ordering an electric easy chair and need to know if I should have it delivered down stairs or up stairs in our bedroom — which is also close to a full shower. I really appreciated the great information in your book! Teri”

END_OF_DOCUMENT_TOKEN_TO_BE_REPLACED

While the patient benefits of attending cardiac rehab after heart valve surgery are well documented, the utility of these post-operative programs remains disappointing — as only 20% of patients who could benefit from cardiac rehabilitation are referred to outpatient facilities.

END_OF_DOCUMENT_TOKEN_TO_BE_REPLACED

It’s been awhile since I posted. Had a heart cath a couple weeks ago

Rob says, "It’s been awhile since I posted. Had a"
Read more