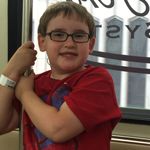 Send Kimberly a note
My Journal 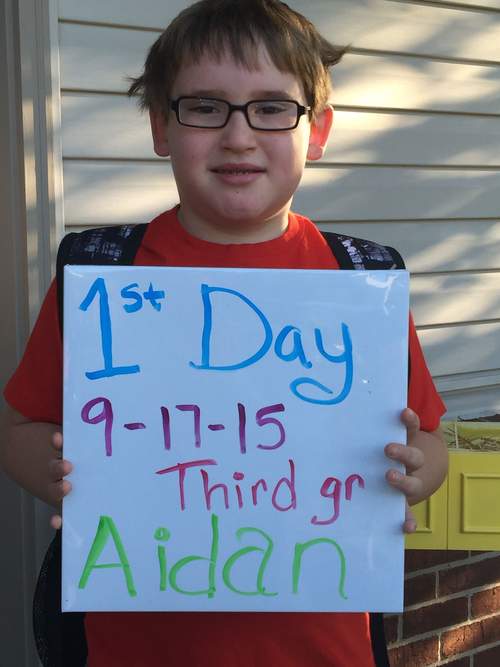 Adam Pick  Thank you! This just made my day! Go Aidan! Go!

Tammy Pilcher  Congratulations Aidan! You are an inspiration! God bless you!

Elaine Cutri  How wonderful Aidan! So glad to see you're doing so well. Hope you enjoy 3rd grade!

Rita Savelis  Oh, to be as young and enthusiastic as Aidan! Great kid!

Jeanette Davidson   So cool! Have a great year!❤️

Lilly Black  Congratulations, Aidan! that's awesome news! You are doing great.... you inspire all of us. Keep well....have a great year in school!

Kimberly Nuttle  Thanks everyone! Aidan loves reading these comments. :-) Of course, he's also very happy that it's now the weekend and he gets two days off to rest!! LOL (as we all do!)

Mary Myers  Enjoy your time in 3rd grade. Have fun and keep on being so awesome. Love your heart sis Mia

Back to School!
Aidan had his 2 week post-op check up last Thursday and his Doctor said that he is doing really well! He told Aidan that he could go back to school in another week. (Really that is more because of trying to protect his chest from possible accidental injury because there are over 400 kids in his school and so sometimes it's a bit crowded at various times of the day.) Aidan was so bored though, that he almost begged us to let him go to school today, so - today was Aidan's first day of Third Grade! He made it thru the entire day, which is great - but it did tire him out quite a bit.
We also got the good news that he only needs blood draws once a week now, it seems they are getting his coumadin levels and dosage figured out. He is really really happy to only have to go do that once per week!
Hope everyone is having a terrific week -- TGIF (soon)!
Like  |  Adam Pick, Tammi Gunwall, Elaine Cutri likes this

Kenny Knox  Wow, Aidan is a champ! Good for him (and you) on his positive approach! I hope he has a great school year! 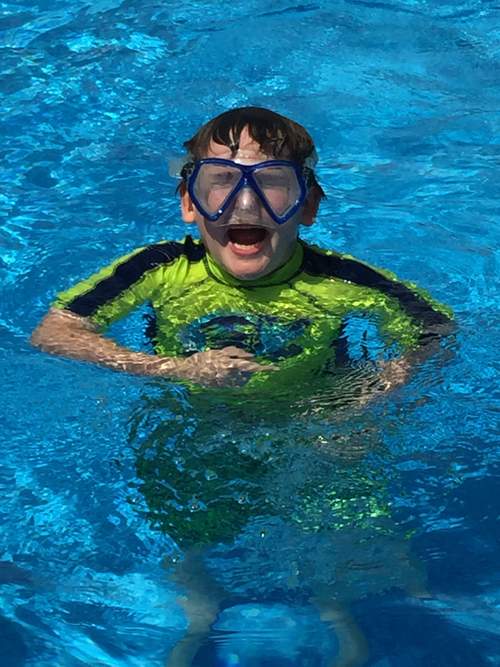 Mary Myers  Aidan, you are an amazing young man. You will be able to do many things in your life! Go enjoy your life! Big healing hugs!!

Here's my newest picture!
Aidan, riding the People Mover in the D, the night before his surgery. 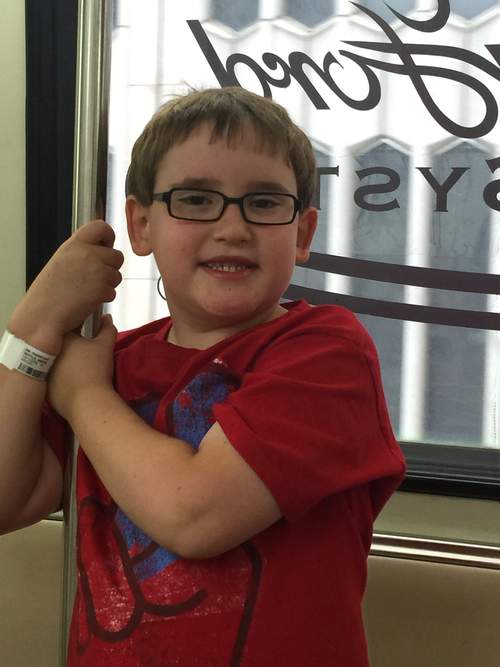 Tammy Pilcher  What a brave young man! So happy he has his surgery behind him now. God bless y'all!

Goodbye Hospital, Hello Home!
Well, post-op day seven and the doctors finally released Aidan so that he could go home! Aidan (and all of us) were so happy to hear that we could finally get home. We came home yesterday (Tuesday), and Aidan had his first blood draw this morning to check his INR levels for his Coumadin. He is walking a little more each day, and today, he even went to school to meet his teacher for third grade. Even though he'll miss the first two weeks of school, and it was a LOT of walking for him, it was good for him to see some of his friends, see his new classroom, and meet his teacher. A little stronger each day and he'll be back to his old self, but able to participate more in his favorite game - dodge ball!
Like  |  Mary K, Kenny Knox, Meredith Bray and 1 other likes this

Bob M  Outstanding! God bless and rise up! Home is where Aidan's fixed heart is!

Bethany spence  What a champ! Congrats on the way to recovery!

Jean Raber  I bet that was good day for you, too, Kimberly. My heart goes out to you both.

Susan Wozniak  Great news! How brave he is!

Post-Op Day six.
Aidan's surgery was exactly 1 week ago today. We decided to go with a St. Jude's Mechanical valve in his Aortic valve. Surgery was one week ago, and Aidan is doing great. We've had a few bumps this past week, with fluid around his left lung causing it to collapse on the bottom portion. He's been moving around, coughing well, using his spirometer and getting rid of the excess fluid. His chest tube, central line and ART line are all out. We are are still on the heparin trying to figure out his dosage (and stabilize) for his Coumadin. He has been up and out of bed walking around the past three days and is extremeley bored. We are crossing our fingers that we'll be able to head home tomorrow.
Like  |

Kenny Knox  Congratulations Aidan! I hope for a speedy recovery!

The Coke Zero & Mentos Rocket Car
Watch this in 3D at http://www.youtube.com/watch?v=YuxqPuhLBZg Driver on closed track. Don't try this without professional help. Want to see this video in 3-...

Mary K  Sending prayer for the little guy. May he heal perfectly. 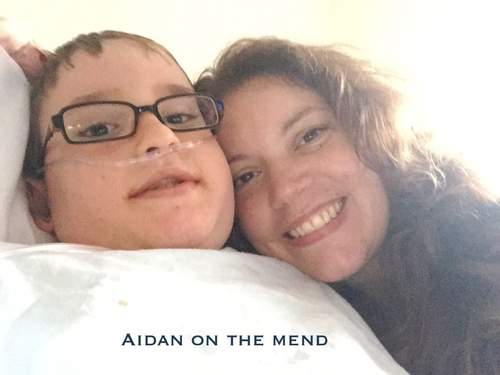 Adam Pick  Great picture Kimberly!!! Thanks for sharing!!! Give my best to Aidan!!!

Kimberly Nuttle  Thanks all! He is doing great!

Naomi Ivker  Great to see. Hope he gets to head home soon!

The Journey, Part 1
This is our journey. We share it with our son. We were blessed to have twin boys in 2006. Our younger twin (referred to by our doctors as baby B), was taken immediately to the NICU, due to fluid in his lungs. While there, they discovered that he has Aortic Stenosis.

Total shock. I had difficulty understanding how my beautiful little baby could be anything but perfect. With just having given birth via C-section to 2 babies, and then hearing and trying to understand this news, it was overwhelming.

At 8 wks old, our son had a balloon catherization, because his valve had begun to close up.

He is now almost 9 years old. He's had yearly check-ups with his Cardiologist and has been doing well. This last year, we've noticed a change. In addition to several boughts of bronchitis through the cold/flu season, he also had strep twice. He's been having more difficulty keeping up with kids doing any sort of aeorbic activity, tires out much quicker than he did before.

Yesterday, at his annual check-up appointment, we learned that his valve has become worse, and he needs to have heart catherization on Monday, and then will need surgery to replace his aortic valve.

We are at this point thinking that we will opt for the Ross procedure. We have several questions for the cardiologist and have been writing them down.

One big question is, what is the recouperation time? Is it open heart surgery?
Like  |

My Ross was open heart (I'm not familiar if they do Ross less invasive). I recovered well and was back on the basketball team the following season. I was able to do everything my twin and friends could do except heavy weight lifting. The replacement aortic valve lasted me 18 years. I just had it replaced but my pulmonary replacement is still doing great!

I'd be glad to answer any additional questions or talk to you about my experiences with heart surgery as a child. You can email me at knox.kc@gmail.com. I hope this info helps!

Clare Auten  My middle child just turned nine. I can't imagine going through this with him. Prayers for your whole family. I am glad Kenny will be able to help with his story.

Kenny Knox  Hey Kim- Aidan already seems ahead of the game with the research! If he hasn't had a catherization yet, they are a breeze and he won'the feel a thing.

I was ... Read more
Kenny Knox  Hey Kim- Aidan already seems ahead of the game with the research! If he hasn't had a catherization yet, they are a breeze and he won'the feel a thing.

I was in the hospital for roughly 8 days after the Ross. I had the procedure in mid July and was able to return to school when school started in late August. The recovery wasn't hard but took some time to gain energy back. Things like coughing, sneezing, laughing were the hardest. It was about 3 months before I was engaging in more physical activity however I was walking, going places, and doing passive things with friends after 6 weeks. I hope this helps :)

On a side note, I think it's great that you'received on here for him. My mom was at my side 100% of the time during my childhood surgeries and I'll never forget it. Aidan is very lucky to have you! I wish him and your family the best!

Tammy Pilcher  Hi Kimberly, welcome to the site. I'm so thankful Kenny can help you with his experiences. I'll be praying for y'all. God bless!

Bob M  I pray for Aidan to have a textbook procedure and an uneventful recovery. It will be a new day for Aidan with a fixed heart. God bless and rise up!

Lora Lee Peterson  Hugs and prayers for all of you! 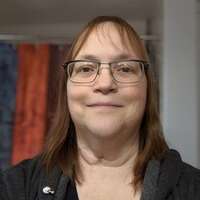 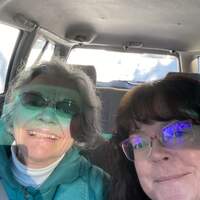 Cathryn says, "Question for all of you who have completed your ..." 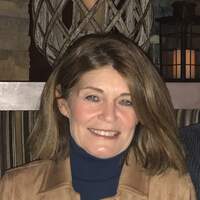 Jeanne says, "I had my PreOp testing yesterday which was ..."