Interest in minimally invasive procedures for heart valve surgery is increasing for both medical device manufacturers and patients. As we learned last week, Medtronic spent over $1 billion to acquire CoreValve and Ventor Technologies, two companies that specialize in non-invasive valve replacement technologies for diseased aortic valves.

From the patient perspective, the advantages of minimally invasive surgery are (i) less post-operative pain, (ii) faster recovery and (iii) lower mortality. As you have read in this blog, several of my readers have had such procedures including non-invasive robotic surgery for mitral valve repair.

Over the past few months, I’ve been receiving additional comments about minithoracotomy for aortic valve replacement and mitral valve replacement. In this type of cardiac surgery, the patient does not have a median sternotomy in which the sternum is broken (as discussed previously in “Vicki’s Thoracotomy Versus Sternotomy“).

Given this topic, I just received a very interesting patient story from Jim Engelmann. Jim, as pictured below, recently had aortic valve replacement via mini-thoracotomy.

Well, I went for it!  I had the minimally invasive surgery through a mini thoracotomy on January 19, 2009.  I really had faith in my surgeon, Dr. Narendra Sastry. I believed he had a thorough process just in case there were any problems.

My medical team did not have to break the sternum. Instead they entered my chest from above the heart.  The operation went well, and I was off the tube before being brought to post-op. The operation took 7.5 hours which was very tough on my wife.  I stayed in the intensive care unit (ICU) for four days – mostly because of fever and the need to keep my chest tube in longer-than-normal.

As for recovery, I was doing well until Saturday when I went into A-FIB.  Then, on Sunday, a fever made them start drawing cultures.  I was in the hospital until Sunday when they decided that there was no infection, just contaminants on the cultures.

Unfortunately, my coumadin was over-prescribed, which made my INR skyrocket to 14.  I went back to the hospital on Friday for vitamin K shots and other precautionary treatments. Today, my INR is a 2.2.  While this is too low, we’re bringing it back up slowly.I took a ten minute walk outside this evening, and I’m feeling stronger than at any other time during this procedure. I hope that they can get the INR under control quickly.  Once that’s better, I will feel better.

In the meantime, I am thankful for the mechanical valve clicking noise in my ears and the 4 inch scar on my chest. I took a picture today (shown above) for the first time.  My wife was not a big fan of photos.  What you’ll see is a small scar on my right chest (mostly scabbed over).  I do have three incisions on my right side, two from chest tubes and one as part of the procedure, but they are almost invisible at this point. The other incision (that I did not photograph) is in the right groin, and 8 inches long. It is also mostly healed. 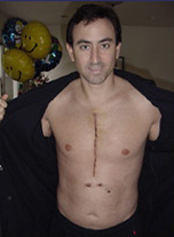 It’s my 4 week anniversary, and I spent it at work.  I went into the office for 5 hours today!  I would say that I am at about 60-70% strength.  I was able to walk 3 times a day for 20 minutes each of the last 7 days, and probably could have done more without too much issue. I’m thrilled to have been able to do the less invasive procedure, and know that my recovery has been improved because of it.

My surgeon was Dr. Narendra Sastry in Tampa, Florida. He was excellent at describing the procedure and his bedside manner was fantastic.  I am lucky to have found him.

Let me know if there is anything else I can share.  One thing worth noting… The only reason I qualified to do the surgery in this manner is because I ONLY had the aortic valve replaced.  If any other procedure is required at the same time, then the minimally invasive option is not an option.

In closing, thank you for writing your heart valve book and starting this website.

“What About Tricuspid Valve Surgery for Patients with ICD or Pacemaker Leads?” asks Henry

Had an angiogram yesterday. It went well.

Going Red for Women today!!! To learn some great information about