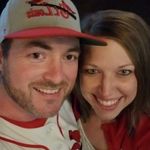 Send Justin a note
My Journal

After 11 days...
Home health nurse left a bit ago. All seems to be progressing well with recovery.

My INR level for the Coumidin is low at 1.8, so they are upping the Coumidin to 8mg tonight, & 6mg the rest of the week until we check it on Friday again when she returns.

My chest is somewhat sore, as expected, maybe a 4 or 5 on the pain scale. Haven't taken Tylenol in 9.5 hours. Going to try & ween myself off of Tylenol this week.

Back & neck are actually more sore than chest. Nurse said it will take a few weeks for muscles & normal mobility/movement to come back. But it's not horrible.

Hoping to take a few walks this week with the temp's getting above 50. Getting a bit stir crazy in the house.

Slow & steady wins the race.....
Like  |  Bradley Dunn, Frank Giovanniello , Shannon Gray and 1 other likes this

Everyday you will feel better than the last. I was walking 2 miles a day 4-5 weeks into recovery. For sleeping, the recliner was, and still is, my best friend.

Tracy Fallu  Sounds like you are doing great. Ohh, that neck and shoulder/back pain is definitely miserable. If you can have someone gently massage the area, it may help.

Catie B  Hope you are feeling stronger and stronger as the days go by, Justin. 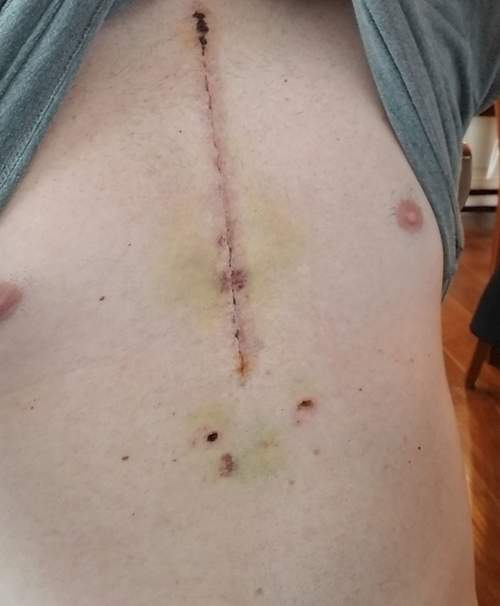 My last 2 Weeks.....
I had Cardiac Cath on November 1st, just to check things out prior to the scheduled Mechanical Valve surgery. That went smooth. I was only under a small dose of anesthesia, & was awake for the 20 minute procedure. They just put me into a relaxed state so I would lay still & be calm. They inserted the cath through my right wrist, & looked around the arteries & heart to make sure there were no major blockages.

After the Cardiac Cath, they told me it looked like all that needed to be done was the valve replacement, & that all should be fine. They did tell me that there seemed to be some "minor" enlarging of the aorta outside of the valve, & asked if they determined it to be dangerous & need replacing to take care of it when they had me open for the valve replacement, & I signed off on it.

I really was not nervous about the procedure. Between this website, & talking with several people that had the valve replacement done by the same surgeon who has been doing these for 30+ years, I was comfortable.

I went in to the hospital at 5am for the surgery on 11/07. They brought me to my pre-op room. I got naked, put a towel over my privates, & they started shaving away all the hair on the front of my body, & then using sticker pads to pull the hair off. After that was done, it was time for another wipe down with those sanitizing pads. Put a gown on, got some IV's set, & then had the surgical team come in for a little explanation of how the next 6-8 hours would go.

After that, I kissed my wife goodbye, & off to the O.R. we went around 7:15am. They asked me what kind of music I wanted to listen to, & I told them some Red Hot Chili Peppers & Dave Matthews Band. Made it through 2 songs while they were administering some anesthesia, & I was OUT.

I think I woke up about 8 hours later in the post-op recovery room, under some pretty heavy pain meds/IV. The team told me it was a SUCCESS, & once they started, they were done in 3-1/2 hours.

They took the breathing tube out about 6pm that night, & then I was just sleeping on & off for the night, & eating ice chips when the ICU nurse would come in & check on me.

The morning of 11/08, I was able to take some Percoset pain meds, with some water. The water was FANTASTIC.

I was then on a regimen from 11/08-11/10 of taking 2 percosets every 4-6 hours. I also took some Tramadol, & some sort of Beta Blocker for bloop pressure every 12 hours as well. Oh, & the Coumidin every night around dinner.

I was walking the halls of ICU 12-16 hours after the surgery in the middle of the night with my nurse. After that, I was up walking every 4-8 hours doing laps. The entire ICU medical team told me I looked to be a record setter by being released to quickest.

Finally on 11/10, they told me to start eating more, & I needed to have some bowel movements happen before I could be cleared for release. Well, once I found out what anesthesia, morphine, & percoset does to your intestines, I knew I was in for a challenge.

Being on the pain meds, I was not hungry. Just wanted water & gatorade. I was also taking anti-nausea meds when needed with the pain meds.

So on Monday, 11/11, the RN for my room told me she was going to get my bowels moving, & get me home. Which I was not really concerned about. I just wanted my body to tell me when it was ready.

Well, after 6 doses of laxatives/stool softeners that they started giving me on 11/10 & into 11/11, the nurse told me it was time for a suppository to be inserted to help open things up from the back end....whatever. Do what I gotta do.

At that point, it was early morning on 11/12, & I told the RN I had that she needed to call the doctor, because my stomach was bloated, & I had barely ate anything, & I could not pass a bowel on my own. The GI Doctor on attendant came by, & told me she recommended some imaging to be done, so off we went. The imaging showed "Pseudo Bowel Obstructions", basically pockets of gas blocking the bowels from moving.

So they then said a CT Scan with some imaging dye needed to be done, which would be done via an enema. What's a 3rd enema in 12 hours.....

So after the imaging dye & enema were complete, they told me to go ahead & use the restroom in the imaging, & let the enema do it's job. It did....

Went back to my room, told them Percoset & Morphine are the DEVIL, & Tylenol is all I need.

After all the bowel issues, I then got some much needed rest, began eating a bit more, & having regular bowel movements.

They discharged me at 10:30am on 11/13 after 6 days. I would have NEVER thought bowel movements would have been the biggest issue for me, but it was. Has I pulled off the pain meds sooner, maybe I could have gone home after 4 days.....but the whole thing doesn't bother me. I am now home, resting & recovering.
Like  |  Frank Giovanniello and 1 other likes this

Marie Myers  Glad you are home and recovering!

Justin Eilermann  I had the surgery at HSHS St. Elizabeth's in O'Fallon, Illinois.

Lindsay Rouse  Thank you so much for the detail! So helpful! Glad you are starting to recover well!

Frank Giovanniello   What a ride ! I'm so glad your home. Sounds like the surgery was the least of it all. Stay healthy my friend, keep walking. DMB said " So Damn Lucky"

Rose Madura  Glad you are recovering at home now after your "successful evacuation." 😊

Anthony Kozleuchar  Justin, Glad you are home and doing well! I hope I don't have the same problem!:)

Catie B  Oh my goodness. Sheesh, I'm sorry you went through that! 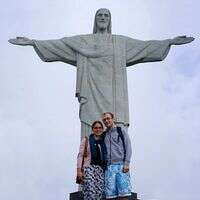 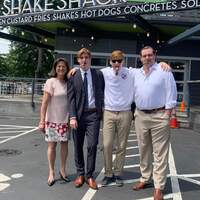 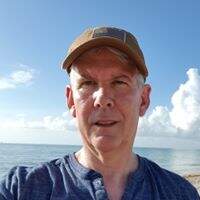