Leilani is a Heart Warrior Princess!

How would you react if you learned that your unborn child was suffering from a life-threatening disease known as hypoplastic left heart syndrome? What would you do? Who would you turn to?

This is the story of Leilani, Kayla and Jesse…

Many, many, many thanks to Leilani, Kayla and Jesse for sharing their courageous and inspirational story with us. And, an extraordinary thanks goes out to Dr. Evan Zahn and all the team members at the Guerin Family Congenital Heart Program at Cedars-Sinai Medical Center in Los Angeles.

P.S. For the hearing impaired members of our community, please find below a written transcript of Leilani’s patient success story:

Kayla: When you find out you’re pregnant, you’re just thinking oh, we’re having a baby. You don’t ever think, my daughter could be going through all these surgeries the second she’s born, and what if she doesn’t survive? Like, it’s really just scary and just there’s so much going through your mind. If you’re not willing to fight, then why would they.

Jesse: My name is Jesse. This is my wife, Kayla, and my daughter Leilani. We’re from Ventura, California.

Dr. Evan Zahn: Leilani has one of the most, if not the most, severe heart disease that children are born with, something called hypoplastic left heart. She was diagnosed in utero, so when Mom was pregnant, we were able to diagnose this. Congenital heart disease is the number one birth defect in the world, and it affects about a little less than 1% of babies that are born. So that means if you walk into any first grade class, the odds are that there’s a child or two in there who have a congenital heart problem.

Kayla:  They sent us to a specialist, who sent us to Cedars, and then once they told us, “Oh, we’ve seen this before. This is what it is,” this is our little miracle. She’s going to be great.

Dr. Evan Zahn: Congenital heart disease means you’re born with it. These are children who had nothing to do with their outcome. Their parents didn’t do anything wrong. They just were born with a heart defect, and those defects can range from something as simple as a hole in the heart to vessels that are twisted around, to only half a heart, and everything in between.

Kayla: They said that we were going to be induced maybe a day before my due date. They wanted it to definitely be planned for when she did get here.

Jesse:  They were very confident. We did not hear that Leilani had a chance until we got to Cedars. We had already priorly made the decision that we were going to continue fighting when we found out. Instead of 50/50 or 20/80, we’re at 80/20.

Dr. Evan Zahn: She was terribly ill and born with a really severe heart condition that if left untreated is 100% fatal. 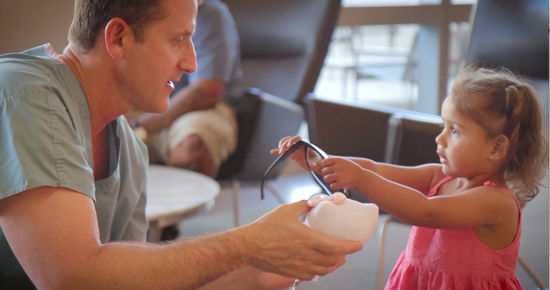 Jesse: We know she’s going to need the surgery. We know that it’s going to be within the next couple of days, but it all just depends on how well she’s doing and how well her heart’s doing.

Dr. Evan Zahn: We were able to do Leilani’s first operation without doing much of an operation at all. We call this a hybrid procedure where it’s sort of a very minimally invasive approach to correct their defect.

Jesse: Dr. Zahn, that guy, Dr. Zahn is something special.

Kayla: He would just come into the room with a big old smile on his face just like, “We’re all done. Everything went great,” and that just – it’s so reassuring. It’s just amazing.

Dr. Evan Zahn: What’s next for Leilani is she has one more surgery that will complete her repair, but we expect her to do very, very well.

Kayla: When somebody asks me what my connection to Cedars-Sinai, I feel like this is almost a second home to us. It’s like being with family.

Dr. Evan Zahn:  I think it’s really important to seek out an experienced center. You want to be around a big heart program, heart center that specializes in this.

Jesse:   I think the best advice I’d have is just to stay strong and just be there for your kids.

Kayla: I couldn’t imagine life without her. Like, it goes on. Life gets so much better, even through the hard times.

Cathryn says, "I wasn’t going to say anything until..."

Good day, everyone. Thought I'd share a little about how I'm feeling

I wasn’t going to say anything until it was confirmed, but Mom (Judy

Cathryn says, "I wasn’t going to say anything until"
Read more

Wanda says, "I just found the blog about the mental"
Read more