Hello! My name is Dr. Craig Smith and I am a cardiac surgeon having graduated from Case Western Reserve University in 1977. To date, I have performed approximately 3,500 cardiac surgeries, of which 2,275 involved heart valve procedures. I regularly perform surgery at NewYork-Presbyterian/Columbia University Medical Center. Read more...

I believe my greatest strength is nearly 3 decades of experience with simple and complex valve disease. 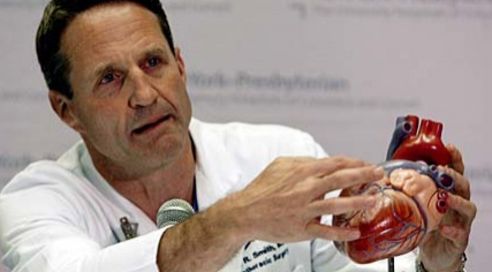 "I feel great after heart valve surgery. I'm very thankful for Dr. Smith and his team."

"I did months of research to find my heart surgeon because I knew that I needed at least 2 valve replacements in the same surgery.

Dr. Smith's name rose right to the top, and afternoon speaking with his wonderful assistant, Dana Reed, I knew he was the one!

I went to New York City to meet with him and became even more confident after the consultation. He said that I would need the aortic and mitral valve replaced and that he could probably do a repair on the tricuspid.

Two weeks later, I was admitted for surgery. Many people have a hard time believing this, but when I awakened from surgery I thought that I was still waiting for it! I asked the nurse when it would be and she said "Two days ago!" This was a shock and a wonderful surprise! I was elated to be alive and not even feel as though I had been through a surgery. A week later, after great nursing care, I was driven home where I recovered very well. I had almost no pain, except when sneezing, and only took Tylenol.

Dr. Smith is terrific and he has a great team at Columbia University Medical Center / NewYork-Presbyterian Hospital!"

"Dr. Smith is my HERO. Woke with extremely little to no pain; haven't taken anything stronger than Tylenol. He came everyday, he's wonderful, outstanding surgeon. I'm two weeks post-op and although still tired, feel very good. He's the best of the best!!!"

"Dr. Smith is a professional and knowledgeable doctor, explaining the procedure and what is to be expected. Surgery was with no complications thanks to a very experienced doctor. Thank You Doctor Smith. "

"This man is amazing. He has a calming nature and is extremely professional. Surgery was performed at Columbia Presbyterian in NYC. My surgeon visited me before surgery and explained the procedure. I would recommend him highly as he is simply the best!"

"My valve repair was successful. However, I developed complications and eight days later I was rushed back into surgery. Dr. Craig Smith and his team saved my life. "

"Dr. Craig Smith is the 'Man' in New York. Possibly the best there is on this planet. I'm 64 years of age, 18 months from surgery and I play tennis 7 day's a week -- both singles and doubles. I run on a treadmill and work out using free weights. I'm alive, I'm healthy and living my life. Without Dr. Smith, I would be on Boot Hill. GOD Bless this man for all he did for me, and countless others. "

"The operation itself and recovery was flawless, but what distinguishes Dr. Craig Smith is his responsiveness. For example, after I was discharged I felt very nauseous from the anesthesia. When I could not take it anymore, I called his office on Sunday evening. He called back within 15 minutes and re-assured me, but was also ready to see me that evening should I choose. On another occasion, I was not sure whether the chest pain was from a pulled muscle or had something to do with the heart. Dr. Smith again responded within minutes. (It was a strained muscle). All in all, the operation was extremely successful (this is of course the important part) but what makes Dr. Smith special, is his responsiveness to his patients."

"Dr. Smith is an excellent surgeon and his staff is highly trained and competent."

"I was very fortunate to have Dr. Craig Smith as my surgeon. He was very thoughtful and patient in explaining everything to me, very reassuring in his manner and quiet demeanor and very attentive. "

"Experience with the surgeon was terrific. He was very professional in manner and was clear about explaining the operation, risks, decisions that had to be made and had a great team for followup. Very happy with the result"

"Dr. Smith is an outstanding surgeon both technically and at the bedside. I was very happy with the results of the surgery."

"Dr Smith did my aortic valve and heart bypass surgery almost 19 years ago. I'm going on 92. I'm so glad he did the operation. I think he's the best surgeon on this planet. I'm still very active & my heart keeps pumping. Bless Dr. Smith & his family."

After medical school, Dr. Smith completed his general surgery residency and a fellowship in vascular surgery at the University of Rochester. Then, following his completion of a cardiothoracic residency program at Columbia Presbyterian, Dr. Smith joined the faculty at Columbia in 1984.

During his career, Dr. Smith has received several awards, honors and distinctions within cardiac surgery including:

* Chief of the Division of Cardiothoracic Surgery at Columbia. * "Practicioner of the Year" award in 2004. * "Heart of New York Award for Achievement in Cardiovascular Science & Medicine" in 2007. * Chairman of the Department of Surgery at Columbia.

To schedule an appointment with Dr. Smith, you can:

The office of Dr. Smith is located at 177 Fort Washington Ave, New York, NY 10032. To get driving directions to this office, please click the map below.