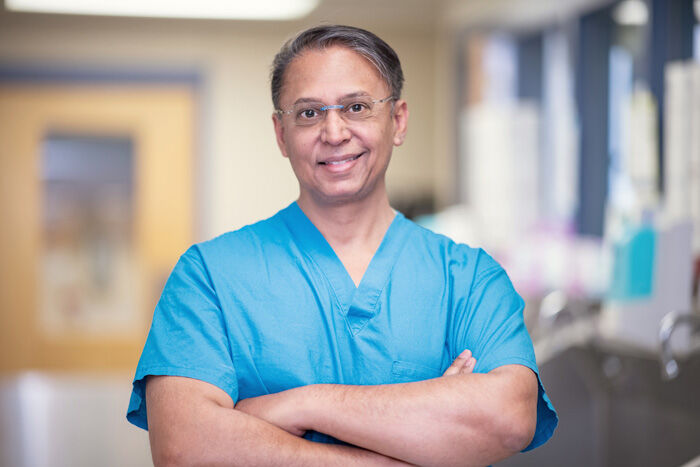 Dr. Sandhu performs the full range of cardiac surgical procedures, including mitral valve repair and replacement surgery, aortic valve and aortic root surgery, tricuspid valve surgery and transcatheter aortic valve replacement (TAVR). He came to Northwestern Medicine following 20 years of practice in Ohio and New York. In Ohio, he was noted to be the busiest coronary artery bypass surgeon in the state for several years. Since joining Northwestern Medicine in April 2020, he has continued this impressive upward trajectory, having already performed more than 200 cardiac surgeries, including TAVR, at Northwestern Medicine McHenry Hospital.

From a young age, Dr. Sandhu was interested in pursuing a career in medicine. “Very early in life, a close family friend who was a general surgeon would take me with him to the hospital,” he says. “I was fascinated by the heart and by surgery itself, and by fourth grade, I wanted to be a heart surgeon.” He attended King Edward Medical College, completed a residency at Harlem Hospital Center, and completed fellowships at both Beth Israel Deaconess Medical Center and the Cleveland Clinic.

One of Dr. Sandhu’s mentors at the Cleveland Clinic was Patrick M. McCarthy, MD, who is now the executive director of Northwestern Medicine Bluhm Cardiovascular Institute. Coming to Northwestern, says Dr. Sandhu, offered him the opportunity to work with Dr. McCarthy again, and to lead the expansion of Bluhm Cardiovascular Institute to the northwest suburbs of Chicago: “Northwestern Medicine already has a high standard for cardiac surgery across our hospital system. We have now taken those high standards and established them in the northwest suburbs.” The Northwestern Medicine system is anchored by Northwestern Memorial Hospital in Chicago, which performs the highest number of heart valve procedures in Illinois and is currently ranked among the top cardiology and heart surgery programs in the nation, according to U.S. News and World Report.

When he isn’t at the hospital, Dr. Sandhu is spending time with his wife and three daughters, and he is looking forward to exploring the Chicago area. He plays golf and tennis, and considers himself an audiophile: “I’m into only listening to vinyl.”