I believe my greatest strength is that I enjoy cardiac surgery because it offers the opportunity to tackle complex problems and make an enormous impact on the lives of my patients. It is a great privilege to build relationships with patients and families and to be entrusted with their care. 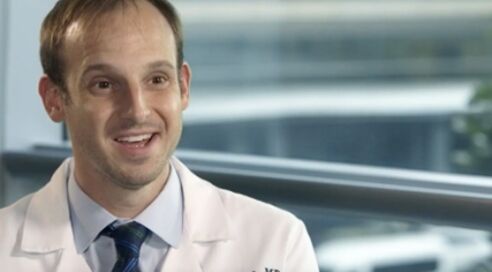 "I can not be anymore grateful for the care and treatment I received from Dr Hodges and his team. Communication was very open from the beginning. Tests and preparation were ordered previously, so that Dr Hodges had all the information that he needed before surgery.

Everything went according to schedule. I was home and recovering before I knew it."

"I am an 82-year old woman, living in Cincinnati, Ohio. In early August, 2021, my primary physician put me in Christ Hospital in Cincinnati because of my extreme shortness of breath and general weakness. After ten days of tests, the surgeons there informed me and my Cincinnati cardiologist that I needed a new mitral valve, but that they would not operate because the surgery was complicated by other issues and was very risky.

They referred me to Cleveland Clinic. Several days later, I was transported to that hospital. I met with Dr. Kevin Hodges, and he ordered a series of tests to assure that my physical conditions would be compatible with heart surgery.

Dr. Hodges then thoroughly explained to me and my family what the surgery would entail; it was complicated by a build-up of calcium around my aorta. Dr. Hodges carefully described what he would do during the operation, including dealing with the possibility of calcium breaking off and entering my bloodstream.

The operation went well, with no resulting complications, and I am back in Cincinnati, and getting stronger and better. Dr. Hodges had an understanding and patient bedside manner, and his knowledge and understanding gained my total confidence.

In a nutshell, God and Dr. Hodges saved my life."

"I intended to write a love letter to Dr. Kevin Hodges and hope this will suffice.

To say that my experience with Dr. Hodges and the Cleveland Clinic was good would be an understatement. I walked into Hillcrest Hospital on a Friday and was life-flighted to the main campus within hours and was watched like a hawk for three days until Dr. Kevin could start the massive surgery first thing on a Monday morning.

Three valve replacements and repairs as well as an ablation followed. Six weeks later it is even more clear how fortunate I was to be at the Cleveland Clinic and to have a surgeon like Dr. Hodges care for me. As a lead heart surgeon at the Cleveland Clinic, you, of course, know he is wicked smart and talented. However, his sensitivity and responsiveness to my concerns was overwhelming. I never felt rushed and felt like I was his only patient in the world.

There is also an aura that great professionals give off when you deal with them that oozes from their pores that basically says "I've got this handled. So relax and know you are in the right place with the right people."

Dr. Kevin has that aura and charisma. And the results of his nearly six hours in my chest justify that confidence. While no one knows ultimately how a surgery will prolong your life, I know that I am in a far better place than I was six weeks ago. My confidence in Dr. Hodges and his team made the decision for the surgery rather easy and the follow up by his team and the clearly dramatic improvements in my health have earned my everlasting thanks to a beautiful group of cardiac surgeons and their teams and a special appreciation on how they -- and especially Kevin Hodges -- have allowed me to look at my children and grandchildren with an even deeper appreciation knowing they did everything that modern medicine can do to save and enhance my life.

Sorry if this note gushes but when all your valves are at a stage 4 of leakage and you can't walk fifteen feet without exhaustion and a surgeon and institution give you a new lease on life... Some gushing should be expected. I am a very fortunate person to have had Dr. Kevin Hodges come into my life when he did."

During his career, Dr. Hodges has received several acknowledgments and awards including:

To schedule an appointment with Dr. Hodges, you can:

The office of Dr. Hodges is located at 9500 Euclid Avenue, Cleveland, OH 44195. To get driving directions to this office, please click the map below.

Learn about heart valve surgery from Dr. Hodges in this video: